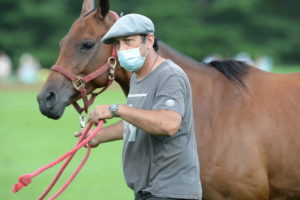 Westbrook, the magnificent charge ridden and owned by Christian (Magoo) Laprida, the number 8 goaler for Gardenvale, stands before being walked by his handler to be awarded the Best Playing Pony citation of the match

Gardenvale, the fierce and formidable 20-goal Long Island-based polo team, seems to be as determined as ever to make its mark as a forerunner in the 2020 East Coast Open, dashing past Los Violines, the Teflon-tough Westchester County-based contingent with a 14-12 win in the first round playoffs of this celebrated annual U.S. high-goal tournament last Sunday.

This remarkable showdown, held at the Greenwich Polo Club (GPC) on Hurlingham Drive off of North Street, featured all the stuff of a world-class athletic event as some the sport’s premiere players and ponies battled it out against one another in the hopes of winding up at the top of the Hublot leaderboard, efforts that were much appreciated by those on hand.

“This has been a great day of polo. The players and ponies are phenomenal, everyone is so great and this is such a huge tournament,” said Eusi Skeete, Director USA, Barbados Tourism Marketing Inc (BTMI), a major GPC sponsor whose outdoor sitting and vendor area is always is a popular draw for spectators. “Greenwich is the destination for polo in the U.S. I call this the intersection between heaven and earth.”

A fast and furious faceoff

Right from the outset, it was clear that Gardenvale and Los Violines were firing on all cylinders, as these two teams flew around the massive Conyers Farm field in fast, fierce and furious fashion in hopes of knocking in all-important points.

During the first half, Gardenvale held a solid lead, with Los Violines making a strong comeback in the fourth and fifth chukkers to bring the score to 13-11 at one point.
In the final tally, Gardenvale, whose roster featured Shane Finemore, its number-one player, Felipe Viana and

Pedro Falabella, the two power-driven Argentinian six-goalers and Christian Laprida, the eminent Argentinian eight-goaler, wound up clinching the top spot on the leaderboard, a result they seemed to be pleased with.
“Today I think we really showed how we can play and we did our job,” said Falabella, who, with his laser-like playing style, was responsible for scoring the majority of his team’s 14 total points. “The East Coast Open is a very important match and we’ve been waiting the whole year to come here to play in it. It’s been a lot of work and preparation coming into this tournament and it was good to be out there.”

His colleagues agreed, including Christian (Magoo) Laprida, the hurricane-like hitter who earned the Most Valuable Player award of the match and whose father, Christian Laprida, the world-renowned 10-goaler, was a GPC star for several decades running.

“I think we did well out there,” said Laprida, whose thunderous charge, Westbrook, was named Best Playing Pony of the match. “We played good defense and worked well together and want to keep building upon that.”
Laprida also gave props to his award-winning pony.
“Westbrook was great,” said Laprida. “She’s strong and quick.”

Notably, as a young boy, Laprida had spent many summers at the GPC watching his father play as a child.
Over the years, he went on to follow the same path as his famous father, and also wound up playing at the GPC, something he considers a major privilege.

“I spent so much time here watching my father play over the years and also grew up playing here,” said Laprida. “It means a lot to me to be back. [The Greenwich Polo Club] is great.”

Laprida’s sentiments seemed to resonate among everyone at Sunday’s match, including the athletes, who could be seen congratulating and laughing with each another following the awards ceremony (while wearing masks and keeping safe social distance), defining once again, the warm and convivial spirit of this unique environment.

A safe, happy and high-energy place

Throughout the entire afternoon, the spectators, vendors, players, management, media members, along with virtually everyone else at this match appeared to be as steadfast as ever about respecting the CDC guidelines as they maintained safe social distance from one another and wore masks throughout, making this a pleasant and secure experience in all regards.

“This has been an incredible day. Everyone has been so respectful with what’s been going on and the atmosphere is so wonderful and upbeat,” said Holly Jaffe of Westport, principal of Wowhaus, a Westport-based boutique interior design firm. “That, along with the fact that we’re here enjoying the incredible beauty of this vast pastoral and green venue while watching the ferocity of polo makes this an experience that is very unique and special.”
Clearly, the GPC seemed to go above and beyond in regard to taking optimal measures to insure the safety of everyone there, who collectively comprised an outdoor reduced capacity crowd.

The grandstand was sparsely filled with masked viewers spread out in safe distance from one another other while other spots, including the white tent and spread-out tables in front of the grandstand, had a similar scenario going on.

Making sure that every base was covered, programs were handed out by gloved and masked staff members to those entering the GPC gates early in the afternoon in tightly sealed plastic bags. (These bags contained small red antiseptic packets for visitors to use as well.). The Herculean efforts of the GPC in regard to this matter certainly seemed to be very much appreciated by everyone there.

“It’s wonderful to be out during this time to take a breath and enjoy the day in a safe and happy manner,” said Tina Pray, a Greenwich realtor with Coldwell and Banker who has been attending matches at the GPC for many seasons now. “The Greenwich Polo Club is an institution known for its standard of excellence and the fact that our community has access to it is a major reason as to why Greenwich is such a unique and wonderful place to live.”