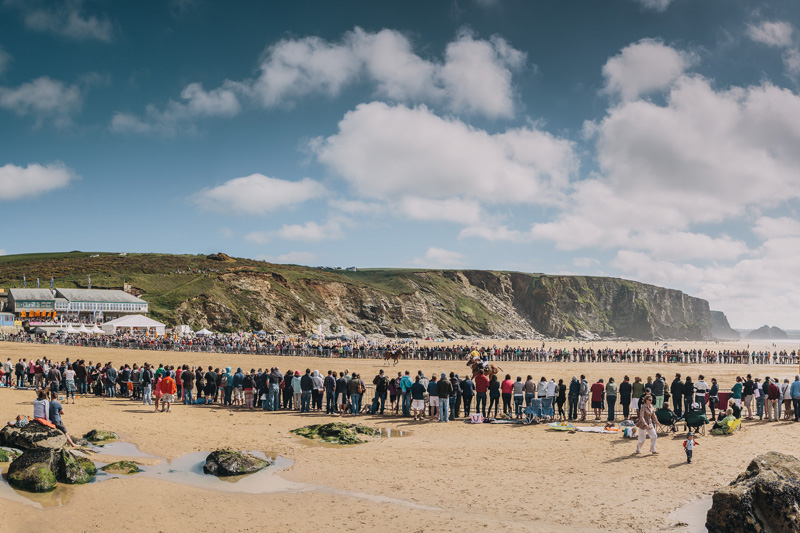 Europe’s best arena polo player leads a star lineup taking part in this weekend’s Veuve Clicquot Polo on the Beach on Saturday 18 and Sunday 19 May 2013.

Chris Hyde, an England international with a nine goal handicap, made his debut appearance at the new-format event at Watergate Bay, Cornwall.

South West Polo and captain of Team First Great Western Andy Burgess,  said: “We heard last week that Chris Hyde could make it – it’s fantastic news for us as he’s the highest handicapped player in Europe for arena polo. This really ups the handicap level to a 15 goal team which is basically high goal arena polo. Currently in top form, Chris Hyde has an impressive playing record including captaining the winning England team against America in February 2013, winning the St Moritz Snow Polo in January this year with Team Cartier, and being named as the World Polo Tour’s Most Valuable Player.

The action started on Saturday afternoon with a kitesurf versus polo pony challenge. Horse power proved dominant for Andy Burgess who rode Shrivar, a former racehorse, to victory in a race along the beach against world-record holding kitesurfer Andreya Bennett.

Andy Burgess then enjoyed further success in the polo arena as his Cornwall team put in an impressive performance against the Rest of the World team, winning by 13 goals to six.

Rob Brockett’s opening goal within 20 seconds of the klaxon got the match off to a flying start, putting the Rest of the World in the lead. Cornwall soon came back through goals from Tim Vaux and Daniel Loe taking them ahead by the end of the first chukka, from which point their lead became unassailable.

Commentator Peter West said: “For some reason or other for the Rest of the World it didn’t quite click, whereas Cornwall were on fire. They played as a team: they backed each other up and they looked after each other.”

Sunday’s entertainment began with a spectacular display of stunt riding from The Devil’s Horsemen, whose Cossack riders have appeared in films including Warhorse and Les Miserables.

The Joules team, captained by Tim Vaux, narrowly retained their hold on the Watergate Bay Trophy presented by Vivek Menon from Veuve Clicquot, by the smallest of margins. Vaux’s team of Andrew Blake Thomas and Jamie Le Hardy won by a single goal, beating the First Great Western team by 13 goals to 12.

Peter West said the match was the best yet seen at the Cornish beach: “I think the standard was up by a measure of around 45 per cent from last year. It was just so much more open, it was end to end stuff, the crowd must have thoroughly enjoyed it. There was never more than two goals in it right from the first chukka. Absolutely amazing.”

Vaux made his intentions clear from the start of the first chukka, scoring within seconds to give his Joules team an early lead only for Chris Hyde to level the score for First Great Western. Andrew Blake Thomas and Tim Vaux both scored to put Joules ahead, but Andrew’s brother Richard scored for First Great Western from a very acute angle just before the hooter to leave the score 3-2 to Joules at the end of the first chukka.

Seven goals were scored in an action packed second chukka, with Joules converting first to extend their lead before two goals from First Great Western tied the match at 4-4. The teams each scored twice more in turn, with Andrew Blake Thomas’s solo goal running the length of the pitch a particular stand-out.

After spectators flooded on to the arena at half time to perform the traditional treading in of the playing surface, First Great Western took the lead for the first time in the third chukka through two goals from Richard Blake Thomas, only to see his brother pull a goal back for Joules from the restart. Jamie Le Hardy then smashed in a high shot from distance to put Joules ahead by 9 goals to 8 at the end of the third chukka.

The final chukka saw eight goals in the six minutes of play. Jamie Le Hardy continued his form from the previous period, scoring with a powerful driven shot. Richard Blake Thomas and Chris Hyde levelled again for First Great Western. Two more goals for Joules from Andrew Blake Thomas and Jamie Le Hardy gave their team an advantage which they managed to maintain until the final hooter blew.

Andy Burgess, who captained the First Great Western team, said: “It couldn’t have got closer; for the first three chukkas there certainly wasn’t a goal between us. It was a brilliant game. The luck went with them, in the last chukka I missed a couple of vital hooks on my marking player.

“When you’re playing this level of polo if you miss a hook or you miss a ride off then they score. We got a bit unlucky, hit the post a couple of times, but Joules deserved to win. They played really well together and it was a great game all round.”

The award for the Best Playing Pony went to Panina, ridden by Andrew Blake Thomas in the first chukka and by Andy Burgess in the third chukka. Panina received a horse rug presented by Craig Hoskin from Mercedes Benz Truro. 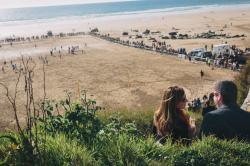 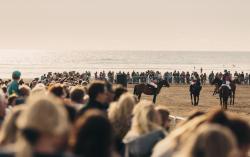 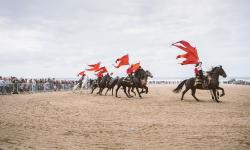 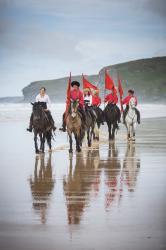 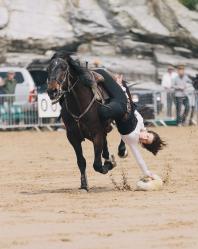 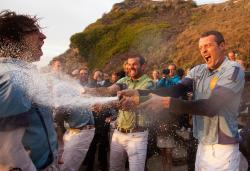 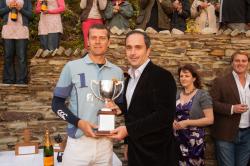 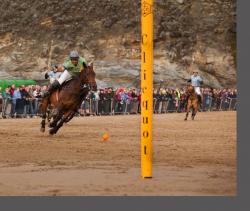 The Watergate Bay Hotel hosted a spectacular timetable of entertainment including more polo matches, a kite surfer vs polo pony challenge, Cossack riding display shows and live music. Now in its seventh year, the event is still free for the public to attend.

A Champagne Deck and Beach Hut barbecue and bar was open throughout the weekend and on Sunday an afternoon tea, Danish open sandwiches, scones and Vueve Clicquot and cocktails. After soaking up the polo atmosphere on the VIP viewing deck, guests headed to the Watergate Bay hotel’s Living Space at 7pm for more Veuve Clicquot at a Champagne reception, House Party Veuve Clicquot Polo on the Beach. 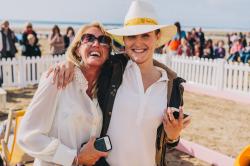 Since 2007, the annual Veuve Clicquot Polo on the Beach has been attracting thousands of spectators to Watergate Bay in north Cornwall with thrilling exhibition matches of beach polo. Some of England’s top international players take to the sands of the famous surfing beach to compete for the Watergate Bay Trophy. Set on its own spectacular surfing beach on the north Cornwall coast, Watergate Bay Hotel has earned a reputation as one of the ‘must visit’ coastal destinations in the UK.

Veuve Clicquot
The Veuve Clicquot Maison was established in 1772 by Philippe Clicquot, and began to thrive when Widow Madame Clicquot took the helm 1805.  Today its eponymous Yellow Label continues to be one of the world’s most beloved champagnes. The Veuve Clicquot Season is an essential guide to the most exclusive social events and parties of the year across the country.

The Extreme Academy, Watergate Bay is one of Britain’s leading venues for beach sports and events. Founded in 1999, the Extreme Academy comprises specialist schools for surfing, kitesurfing, waveski and stand-up paddlesurf, technical equipment hire, and the Shop on the Beach, stocking a wide range of clothing and technical equipment. www.watergatebay.co.uk/extremeacademy